In this blog post, we will discuss the best practices for designing and constructing a sampling system using a back-pressure regulator and how to avoid these common design mistakes. 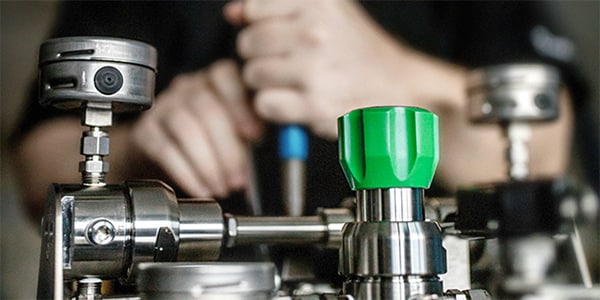 Setting up a back-pressure regulator

Unlike pressure-reducing regulators, a back-pressure regulator controls inlet pressure (upstream pressure) and is usually installed at the end of a line. On the other hand, a pressure-reducing regulator controls outlet pressure (downstream pressure) and is usually installed at the beginning of a line. Both types of regulators work to balance out forces resulting from system pressure with the loading force in the spring created when establishing the set pressure.

If this balance is upset due to external pressure increasing or decreasing, the regulator’s valve or poppet will move either closer to or further away from the seat. Depending on the nature of the valve’s movement, this will allow flow to move through the regulator’s orifice more easily or less easily until the regulator re-establishes balance.

Figure 1 shows a typical back-pressure regulator setup for an analytical sampling system. When there is flow which is not being used by the analyzer (see A in figure 1), the regulator’s job is to divert that flow into a bypass. As the source pressure changes, the regulator then also changes the amount of diverted flow to ensure that constant pressure is maintained at the regulator inlet and therefore a consistent flow reaches the analyzer.

One mistake that sampling system designers often make is omitting the flow restrictors, thinking that the back-pressure regulator can control the upstream pressure directly. But without the restrictor, when the system flow changes there would be little to no change in pressure. The regulator would continue to waste process fluid in an attempt to increase flow as the inlet pressure it is trying to control would not show any change. This may result in the regulator being wide open.

Allowing a lot of flow through the analyzer restrictor (see R2 in figure 1) is another design error because it can cause the inlet pressure of the regulator to drop below its set pressure. This can result in the regulator shutting completely, restricting vent flow. For better control, the upstream flow restrictor (R1) should be sized to allow some flow to go through the regulator even at the maximum analyzer flow rate.

To set up a functional system like that shown in figure 1, system designers should start by closing R2, adjusting R1 to sufficiently allow bypass flow for the desired analysis response time, and then fine-tuning R2 for the analyzer flow desired. The bypass flow should automatically drop by the same amount. If needed, slowly open R1 until the bypass flow is at least as fast as the analyzer vent flow. This will allow the regulator to control its inlet pressure when the source pressure changes. If you expect that the source pressure will change widely, adjust R1 to generate a small amount of bypass flow at the lowest anticipated source pressure.

With the pressure controlled by the back-pressure regulator in combination with the flow restrictors R1 and R2, we can control the flow to the analyzer and to the vent line.

Time delay is often underestimated or misunderstood in analytical systems. One way to mitigate this delay is with a pressure-controlled regulator. Learn how manage your analytical system’s time delay with tips from the experts at Swagelok.

How to Isolate Industrial Fluid Systems with Block Valves

The isolation of industrial fluid system lines prior to maintenance is vital to plant safety. One of the safest ways to isolate a fluid system line is to install two block valves. Learn how to design proper configurations for your system.