How to Flatten a Regulator Flow Curve to Reduce Droop

How to Flatten a Regulator Flow Curve to Reduce Droop

Consistent pressure control is essential to the safe operation of industrial fluid systems. Maintaining a reliable downstream pressure with a regulator can help minimize flow rate changes, especially in a high-flow system. However, in order to sustain pressure control and minimize droop, external components may be necessary additions to your fluid system. 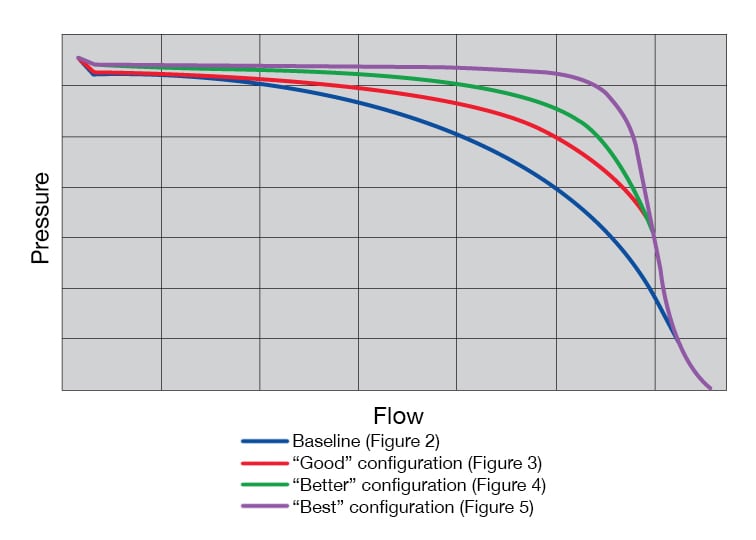 Droop is defined as a decrease in outlet pressure as downstream flow increases. The chart shown above (Figure 1) is an example of a flow curve. A flow curve is a helpful tool used to establish the range of outlet pressures a regulator will maintain based on various system flow rates. Flow curves are created through product testing and represent real performance of a regulator for a given set of system parameters.

The vertical axis displays outlet pressure with the horizontal axis showing downstream flow rate. The flattest, or most horizontal, part of the curve indicates where a regulator will preserve consistent pressure—even with substantial changes in flow. The far right of the curve indicates where the regulator will be fully open and not able to preserve a consistent pressure. Within this area—between where the pressure begins to decline rapidly to where it approaches zero—the poppet is reaching the limit of its stroke resulting in a loss of control. At this point, the regulator is acting less like a pressure control device and more like a restricting orifice.

While every pressure-reducing regulator will exhibit some droop, you can take steps to minimize this phenomenon. Flatter flow curves can be achieved by choosing the right regulator configuration for your system. Four different options to reduce droop are explained below.

Option A: A Simple Spring-Loaded Regulator 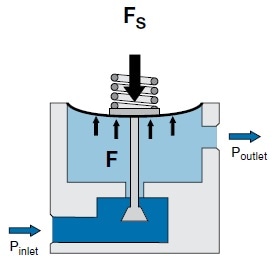 The most common type of pressure-reducing regulator is a spring-loaded regulator. In this design, a spring applies force on a sensing element—either a diaphragm or a piston—which moves the poppet either closer to or further away from the orifice, controlling the downstream pressure. We will use the spring-loaded regulator as our baseline.

A spring-loaded pressure-reducing regulator offers acceptable performance for general applications when it comes to reducing droop. In this configuration, as system flow demand increases, the regulator poppet moves away from the seat to allow additional flow which, in turn, allows the loading spring to relax, lowering the loading force and regulator set point. As flow demands change, the amount of droop is dependent on the loading spring rate and, in some cases, may require frequent manual adjustments back to the desired set pressure if a high degree for accuracy is required.

A more effective option to improve droop and flatten flow curves is a dome loaded pressure-reducing regulator. The loading force within this type of regulator is not controlled by a spring, but by pressurized gas housed in a dome chamber. The gas flexes a diaphragm, which moves the poppet away from the orifice and controls the downstream pressure. The remaining options below will explore how dome loaded regulators, when coupled with various components and design modifications, can deliver enhanced performance by minimizing droop.

Option B: Dome Loaded Regulator with a Pilot Regulator 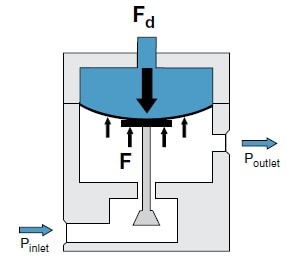 As the system flow demand increases, the poppet will move away from the seat to allow the additional flow. However, unlike a spring-loaded regulator, there is no loading spring which can relax. Instead, the diaphragm flexes downward, expanding the dome chamber, slightly lowering the dome pressure. The pilot regulator senses the drop in dome pressure and responds by opening to allow additional gas into the dome and maintaining the intended set pressure. If downstream system flow demand decreases, the poppet will rise closer to the seat, pushing the diaphragm upwards into the dome and slightly increasing the pressure in the dome. This excess pressure is allowed to vent to the downstream side of the regulator through the dynamic control outlet loop.

Figure 2: The Option B configuration features a dome loaded regulator with a pilot regulator and a dynamic control outlet loop to control dome pressure.

If we refer back to Figure 1, Option C is represented as the third flow curve. The operating flow rate expands before hitting the critical choke point. While this flow curve is flatter than the previous two options, it still exhibits some droop.

As system flow demands increase, the lower pressure is directed back to the pilot regulator through the added feedback line. The pilot reacts to this change in pressure by increasing pressure in the dome loaded regulator, resulting in the proper downstream set pressure. In this configuration, the feedback loop enables continuous, automatic adjustments to stabilize the system for optimized performance. This is demonstrated in Figure 1 as the final flow curve with a faint droop and a broad flow range.

All regulators will exhibit some droop. Depending on your system, droop may be acceptable. But when it is critical to keep the pressure constant as flow changes, the right regulator configuration can help. For more information on how to select the right pressure-reducing regulator configuration for your fluid systems, contact your local Swagelok sales and service center for an expert evaluation.

Managing an analytical instrumentation operation is no small feat. Receiving consistent results can be a struggle for even the most seasoned engineers. Luckily, there are several simple tips your team can use to improve your sampling system.

How to Isolate Industrial Fluid Systems with Block Valves

The isolation of industrial fluid system lines prior to maintenance is vital to plant safety. One of the safest ways to isolate a fluid system line is to install two block valves. Learn how to design proper configurations for your system.