How to Manage Vaporization in Sampling Systems

How to Manage Vaporization in Sampling Systems

It is not easy to vaporize a sample, nor is it always possible. However, if the analyzer in your analytical sampling system requires gas, but the sample is liquid, the only option is to convert the liquid to gas. This process is called vaporization or flash vaporization. The objective is to convert a sample of all liquid to vapor instantly without changing the composition.

If you proceed with vaporization, it’s important to understand the difference between evaporation and vaporization. Evaporation occurs gradually with an increase in temperature. Vaporization occurs instantly with a pressure drop.

It is not possible to vaporize a sample by increasing temperature. Heat causes evaporation, and adding more heat simply makes evaporation happen faster. In a mixed sample, evaporation will allow some compounds to evaporate before others, resulting in fractionation. Vaporization, when done properly, ensures that all of the compounds vaporize at the same time, preserving the sample’s composition.

Things could go wrong when vaporizing. Instead of flashing the whole sample into a vapor, you could unintentionally cause a combination of vaporization and evaporation, resulting in fractionation. Once a sample of mixed compounds fractionates, it is no longer suitable for analysis.

With fractionation, a common scenario is for lighter molecules to evaporate first and travel on toward the analyzer, while the heavier molecules remain behind in the liquid phase. Even if at some later point in the process a fractionated sample appears to be all gas, the mixture will not be of the same molecular proportions as it was before fractionation. It will no longer accurately represent the product taken from the process line. Adjusting process variables--temperature, pressure, and flow – can help ensure proper vaporization and an accurate analytical result. 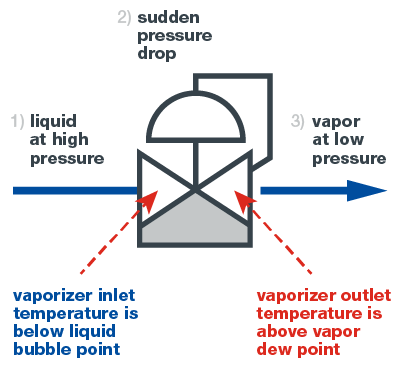 Second, the liquid passes through the regulating cavity in the vaporizing regulator, resulting in a severe and sudden pressure drop vaporizing the liquid. At the same time, heat is applied, enabling the vaporized liquid to remain a vapor.

Third, the sample, now a gas, exits the vaporizing regulator and travels to the analyzer to be read. Due to the immediate transition to the vapor phase, the composition of the gas is unchanged from that of the liquid, ensuring an accurate reading.

In this delicate process, there are many variables or inputs that determine success or failure. For the purpose of this discussion, we will focus on two main sets of inputs.

The second set of inputs concerns settings that you control in your sampling system: pressure, temperature, and flow. Pressure and temperature are controlled at the vaporizer, while flow is controlled downstream at a rotameter (variable area flowmeter) and needle valve. These inputs are set based on what we know about the first set of inputs. Proper vaporization requires a delicate balance of every input. Even when approaching vaporization in a systematic manner like this, the process does require some trial and error.

The best way to understand the first set of inputs is with a phase diagram. A phase diagram plots pressure and temperature, showing at any pair of conditions whether a substance will be vapor, liquid, or solid. The lines indicate the interfaces between two phases. 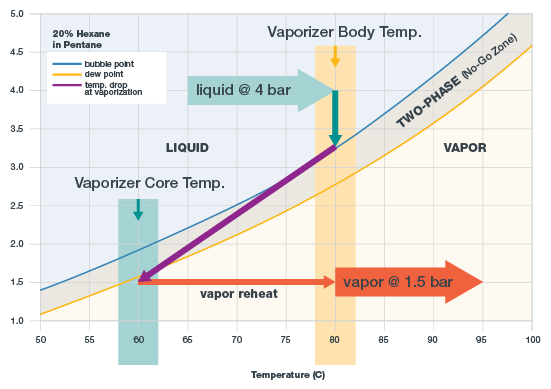 Between the bubble point and dew point lines is the boiling range, or “no-go-zone” of the sample. Here, the mixture is in two phases-- part liquid and part vapor. Once a sample falls into this range, it is fractionated and is no longer suitable for analysis.

On the other hand, some samples have such a wide boiling range that they cannot be successfully vaporized. There is no way to pass from the liquid side to the vapor side of the boiling range. The variables—temperature, flow, and pressure—cannot be altered to avoid fractionation.

Most samples fall between these two extremes. For example, in the sample phase diagram, the band between bubble point and dew point is narrow enough so that with the proper settings, the sample can effectively pass from the liquid side to the vapor side of the boiling range. At the same time, the band in is wide enough that the variables must be carefully altered to avoid having a sample in the boiling range.

Vaporization is a balancing act between the variables. The following is a four-step process for setting inputs for your temperature, pressure, and flow.

In some instances, it is possible for the vaporizer to be hot to the touch on the outside but cold at the core inside. That’s because the vaporized sample is drawing lots of heat and the vaporizer cannot transfer enough heat to keep up. The best solution is to reduce the flow.

Vaporization involves some approximation. Swagelok Field Service engineers can help your team determine the proper vaporizers for your specific sampling system. As a rule of thumb, keep the flow rate as low as possible without causing an unacceptable time delay in the sample’s travel time to the analyzer. It’s better to start with a low flow rate and experiment with increasing it than to start with a higher flow rate.

Phase diagrams help to approximate temperature, pressure, and flow settings, but some troubleshooting will still be required. One sure indication of a problem is poor repeatability in analyzer results. Below we bring up two possibilities when the sample is fractionating instead of vaporizing, with problem #1 being the more common:

Only part of the sample is being vaporized. Liquid is passing through the vaporizer and remains in the tubing on the downstream side. Eventually, it evaporates, and draws heat from the surrounding tubing, making the tubing cold to the touch or causing frost or ice to form. Liquid on the downstream side of the vaporizer may pass beyond the area of the regulator and into other components, such as flowmeters and filters, where it can cause considerable damage.

The sample is boiling at the inlet to the vaporizer. It is fractionating before it can be vaporized. An indicator of this problem is that the inlet tube to the vaporizer twitches, sometimes violently, and the measurement values oscillate. Lighter molecules evaporate and produce a large cloud of vapor molecules. Some of these lighter molecules move on to the analyzer, giving an inaccurate analysis. The remainder create a “vapor wall,” which pushes the liquid back into the process. A portion of that vapor wall then cools and condenses. Finally, the liquid sample moves again toward the vaporizer, where the lighter molecules evaporate, starting the cycle all over again. Eventually, the heavier molecules reach the vaporizer and move on toward the analyzer giving an entirely different analysis.

To solve for this issue, lower the vaporizer temperature.

Vaporizing a liquid sample is challenging. In many sampling systems around the world, vaporizers are constantly fractionating samples and sending unrepresentative samples to the analyzer. You can dramatically increase your chances of success by using a phase diagram of your system’s particular mixture of compounds. You can further increase your success rate by understanding what is occurring in the process—specifically, by knowing what the variables are (temperature, pressure, and flow) and understanding their role in influencing the process outcome. With this framework in place, you can reach the right settings, adjusting in accordance with the signs and symptoms you observe.

Managing an analytical instrumentation operation is no small feat. Receiving consistent results can be a struggle for even the most seasoned engineers. Luckily, there are several simple tips your team can use to improve your sampling system.