One New Valve. Three Reasons It Could Change Semiconductor Manufacturing.

The semiconductor market is not an easy one to navigate. Semiconductor wafer fabricators are under constant pressure to maintain maximum precision in highly complex processes that involve expensive materials, corrosive gases, and extreme temperatures. There is little room for error, especially given the added strain of keeping up with competition and quickly evolving technology demands.

Semiconductor tool OEMs are under similar pressure. They work continuously to improve the efficiency of their tools and differentiate their product designs from their competitors’ so customers can achieve more in less time without sacrificing quality. Perhaps more importantly, they must also constantly look ahead, finding ways to allow fabricators to optimize their processes and inputs (such as new precursor gases) as they race to usher in the next generation of chip technology.

For years, semiconductor manufacturers have seen optimization of atomic layer deposition (ALD) processes as critical to the success of their businesses. Essential to these processes are ultrahigh-purity (UHP) valves that are highly engineered to deliver precise doses of gases during the deposition process used to create semiconductor chips. While relatively small components, these valves have a huge impact on the success or failure of the chip-building process.

UHP valves used in ALD processes are quite advanced compared to valves commonly found in general industrial applications, yet semiconductor manufacturers have still found themselves seeking higher performance when it comes to factors like thermal stability and flow capacity of late. The capabilities of ALD valves have not changed drastically in many years, yet it is apparent that change is needed if the semiconductor industry is to reach new levels of innovation and productivity. 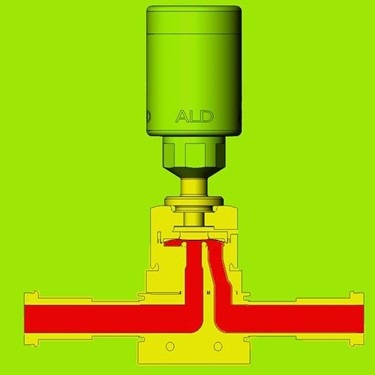 UHP valves must be heated to high temperatures during the ALD process to keep low-vapor pressure gases from solidifying prematurely. The actuators on existing UHP diaphragm valves often cannot be completely immersed in the gas box, however, and must be thermally isolated to maintain their functionality. This can cause a discrepancy in temperature between different components of the valve. When this occurs, cooling of transmitted gases can occur, as seen in Figure 1, with different colors representing varying temperatures.

This is especially problematic when using precursors that require precise temperature stability to remain in a gaseous state prior to deposition, resulting in unwanted residue buildup leading to inconsistent dosing. Given the importance of repeatability in the semiconductor market, the elimination of any potential for variance or inconsistency would be welcomed by many.

Another key challenge for semiconductor tool OEMs and fabricators is the limited flow capacity of existing UHP valves suitable for ALD processes. While existing UHP diaphragm valves offer flow rates that have generally been acceptable up to now, those rates can decline as the valve is heated. Boosting flow rate capabilities of valves could boost the rate at which fabricators can produce semiconductor wafers—or at least could allow them more process flexibility to ensure the stability of their precursor gases—potentially boosting revenues in the process. 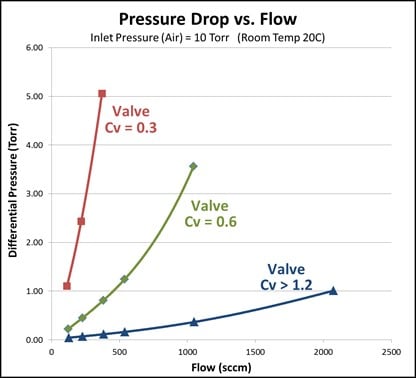 While there are plenty of challenges inherent to semiconductor manufacturing today, there is also a need to experiment with new processes and media that can enable competitive advantage tomorrow.

There is potential for fabricators to improve upon today’s microchip technology and ALD processes by using new highly reactive precursor gases, but existing ALD valve technology does not currently provide the consistently high flow rate necessary to avoid pressure drop across the valve, which can cause low-vapor pressure gases to change states. Figure 2 illustrates how flow rate can impact pressure drop in three different valves.

Fabricators can slow the flow rate in their process enough to achieve the low pressure drop required to use these low-vapor pressure precursor gases but doing so is generally not economically viable due to the required drop in overall system efficiency. Improvements in UHP valve technology will be the key to helping semiconductor manufacturers discover what’s next without sacrificing financial sustainability.

The good news is the next generation of ALD valves is hitting the market, and their design improvements over existing ALD valve technology hold great promise for the future of microchip manufacturing. Here are three reasons for a positive outlook. 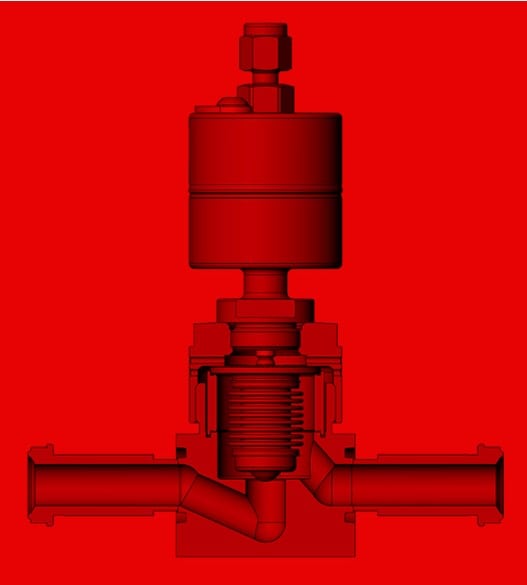 1. The valves are totally immersible in the gas box.

In an application where consistency is key, there is now less risk of buildup or deposition inconsistencies compared to today’s ALD processes. The design of new ALD valves allows for the entire valve to be heated up to 200°C (392°F), as the actuator does not need to be isolated to maintain its integrity or dosing precision. This means that semiconductor fabricators can feel confident that the gases flowing through next-generation ALD valves will be exposed to a uniform temperature, taking some degree of variability out of the process. Figure 3 shows an ideal state of thermal stability, as compared to Figure 1 with its varied temperatures.

2. The flow rates can be much higher.

Semiconductor industry leaders can now achieve the greater flow rates they’ve sought without having to compromise on cleanliness or component longevity. Whereas existing valves might offer a 0.6 Cv flow coefficient, new valves can offer double the flow (1.2 Cv) in the same footprint (1.5 in.), allowing for tool manufacturers to provide greater output without requiring retooling or other significant process changes. If, however, a fabricator has the flexibility to implement new ALD valves with a slightly larger footprint (1.75 in.), they can nearly triple the flow rate of existing ALD valves, achieving flow coefficients of up to 1.7 Cv.

These substantial improvements in flow capacity are made possible by new ALD valves featuring a bellows design rather than a traditional diaphragm design. Bellows valves are capable of higher flow rates, and the bellows inside new ALD valves are highly polished to a 5 μin Ra finish to achieve the UHP performance manufacturers have come to expect from diaphragm valves currently used in the market. In Figure 4, you can see the bellows featured in the center of the valve. The new design combines the best features of both valve technologies into one UHP valve with an ultrahigh cycle life. 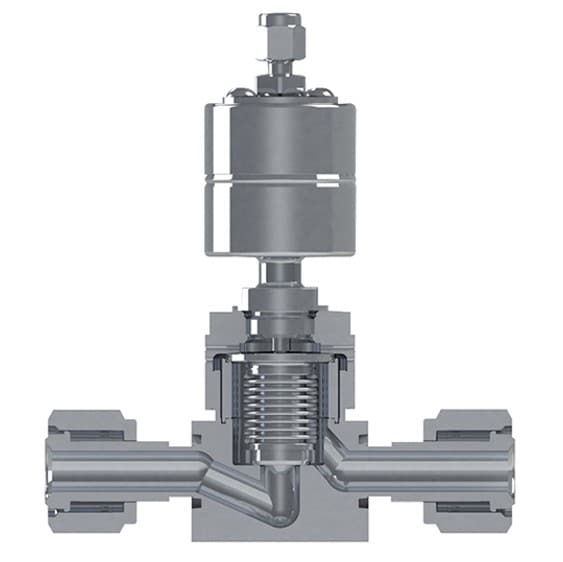 Forward-thinking players in the semiconductor industry will now be less constrained from an innovation perspective. New ALD valve technology provides the performance and durability to allow semiconductor manufacturers to work in new areas of the periodic table of elements, experimenting with low-vapor pressure precursor gases to find materials that might perform better than what is used in ALD processes today. Beyond maintaining consistent temperature and allowing for higher flow rates, new ALD valves are being offered in highly corrosion-resistant materials such as Alloy 22, meaning more aggressive chemistries can be used for processing without concern about problematic pitting or crevice corrosion.

A Better Option for a Demanding Industry.

New UHP valves, such as Swagelok’s recently released UHP ALD20 valve, have great potential to change the market by giving semiconductor manufacturers the high-quality deposition they need without sacrificing process efficiency. What will not change, however, is the competitive, quickly shifting demands on manufacturers in the semiconductor industry.

While tool manufacturers and fabricators adjust their processes and system designs to make the best use of advanced components like the ALD20, Swagelok will remain dedicated to innovation and continuous improvement in its own right—partnering with customers to develop the next solution to industry challenges. Working in the semiconductor market means remaining on a constant journey of iterative improvement, and Swagelok can help you in that journey.

To learn more about UHP valves for the semiconductor industry, or Swagelok’s new ALD20 valve in particular, visit the links below. To begin a conversation about how your operations might benefit from the latest ALD valve technology, contact your local sales and service center.

Innovation for the Next Generation of Semiconductor Manufacturing

The next generation of advanced semiconductor manufacturing presents a host of unique considerations. Read how manufacturing innovation can be achieved through greater capacity utilization, component reliability, and process control.